Past is Prologue: Finding New Audiences for Existing Footage

I admit I was intrigued by the title of this session. As an emerging documentary filmmaker, I have boxes of tapes with (what I think is) fabulous footage that’s never been used and I have devotedly hung onto it, thinking, maybe some day… 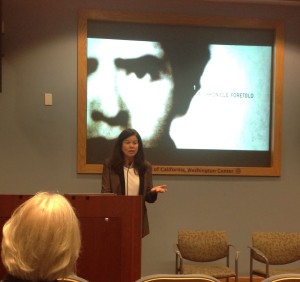 Pamela Yates is a co-founder of Skylight Pictures (with Peter Kinoy), a company dedicated to creating films and digital media tools that advance awareness of human rights and the quest for justice by implementing multi-year outreach campaigns designed to engage, educate and activate social change.

Right off the bat, I was humbled by the work these women have done. Pamela Yates, of Skylight Pictures, is a filmmaker dedicated to making films that advance the quest for human rights. Four of her films were nominated for the Grand Jury Prize at Sundance, and When the Mountains Tremble took the Special Jury Award in 1984. Grace Guggenheim is an Academy Award-winning producer and the daughter of renowned documentarian, Charles Guggenheim. Many of her films are in use at museums and libraries across the US, and she currently manages the preservation of her father’s legacy at The Academy of Motion Picture Arts and Sciences/Academy Film Archive in Los Angeles, the JFK Presidential Library in Boston and advises the programming committee for The Charles Guggenheim Center for Documentary Film at the National Archives. Seriously heavy hitters.

Pamela started the session recounting how she came to make When the Mountains Tremble, a film about a then unknown genocide occurring in Guatemala. She heard about a “hidden war” while she was there working as a film recordist and was compelled to begin documenting the story on 16mm in 1982. The film was finished and screened around the world, received awards, and brought to light a human rights atrocity that no one knew was happening.

It was many years later that Pamela learned the film had actually never officially screened in Guatemala. She arranged to make that happen, and was approached by a lawyer who asked if she still had her outtakes. Apparently two of the generals in the film were currently being investigated for war crimes. The outtakes became crucial evidence in convicting two of the generals for genocide. Suddenly an incredibly profound purpose came to light for footage that initially landed on the cutting room floor.

Pamela also learned that the current generation of children in Guatemala had never been taught about the genocide in school, many of whom had family members that were victims. She realized there was yet another purpose for the hours of unused material. Utilizing the outtake footage of herself making When the Mountains Tremble, coupled with newfound evidence that helped identify victims of the hidden war, Pamela created a new film called Granito. She also began an interactive program to help bring to life the memories of those family members the children were never given the chance to know. These were truly powerful examples of using existing footage for new audiences.

Grace then followed with a more light-hearted story to tell, but no less interesting and imperative. She began by presenting what she believes to be the first film her father ever made – as a teenager at a dude ranch in Wyoming. The 8mm gem was sent to Grace after her father passed away. The sender was his partner in crime at the time, and wanted the family to have the reel. Titled, Sagecoach, it was a knock off of the John Wayne era westerns shot with the teenage campers in full regalia playing the roles, and Charles driving the stage coach (See photo above). Done as a silent film, it was hilarious to watch how these teenagers fashioned their own mini-western. Grace had so many questions she wanted to ask the “co-producer” of the film about the hand her father had in its making, but Charles’ camp buddy died a short six months after sending the reel and Grace never had the opportunity.

As a filmmaker and archivist, she deals frequently with the transition of analog media to digital media – a complicated and delicate process. The film her father made in 1965 for the completion of the St. Louis Arch still screens today for the hundreds of thousands of visitors that visit the famed arch. At one point, the National Park Service finally surrendered to the notion of transferring the film onto a digital platform. This was no easy task, since the film had been recorded in mono, was decades old and since historical in nature, also comprised of a combination of archival footage and material. Grace talked about the ethical issues behind altering the sound from its original state, enhancing the picture quality through modern digital techniques and even re-doing credits and title pages.

In the business of archiving and preserving historical films, Grace is often approached by clients looking to modernize or resurrect films made in previous years. The challenges are many. Sometimes an historic photo critical to the storytelling can’t be found – perhaps it was originally loaned to the filmmaker and the original owner can’t be located. Or the picture itself has gone missing, forcing difficult compromises.

Because of her father’s legacy in making historic documentaries, Grace has become vigilant in cataloguing and organizing everything the family business produces now. From the stories both these talented and accomplished women shared, it became clear that we should all follow their examples and treat our footage as diamonds in the rough that may one day become polished gems. Maybe I will crack those boxes open someday…

Heather Godwin freelances in television production, writing and events. Her short documentary film, Ode to Treasure Hammock Ranch – A Film about Cows and Creativity screened at the Global Peace Film Festival and Bellamy Road Gallery in Florida under Spiritpaddle Films.

With appreciation for our Partners